Last Friday I received in the mail a donation of a photo album from 1925 containing perhaps fifty photographs of Boy Scouts and the Stuckey family in Wilson, NC.  The High Point Museum originally received the memory book from the owner and thought that it should be in Wilson. So we are very grateful that they sent us this unique treasure.

Some of the subjects of the photographs include a Confederate veteran reunion, Camp Wilson, Charleston, SC, Camp Leach (doesn’t sound fun) in Beaufort County, NC, the Appalachians, and Bath, NC. I have digitized a few pages but it is so large I am going to take it to UNC Chapel Hill on Thursday to get it completely digitized and put up on Digital NC. 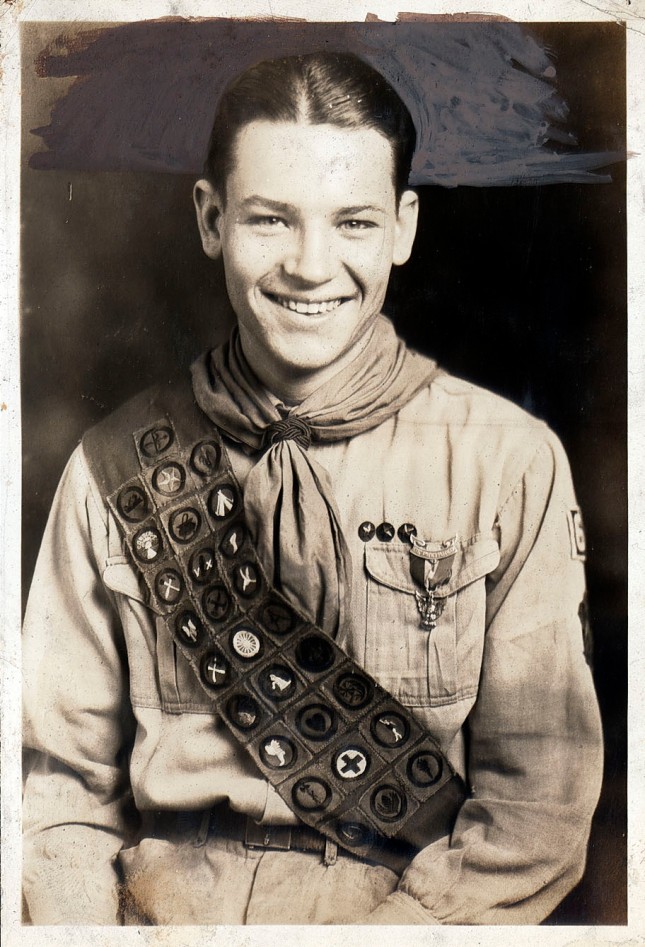 Yesterday a patron was looking for a book in the local history room and said, “I saw it here twenty years ago!”  Well it turned out that the reference copy had been absconded with before I got here but we still had one in the NCNF circulating collection.

The book is a collection of  photographs of NC Confederate Civil War soldiers called, State Troops and Volunteers: A Photographic Record of North Carolina’s Civil War Soldiers, Vol. 1. I had never even heard of the the book and it is a remarkable, painstakingly researched work that required collecting images from 320 families from all over NC.  And it is  the first work of its kind that didn’t rely on photos found in archives.  The author, Greg Mast, received so many photographs that he decided to end this volume in 1862 with the intention of publishing other volumes.  But the fact that this was published twenty years ago gives me the sinking feeling that there will not be any more volumes, which is very unfortunate.  However, there is still this one and there are some singular photographs in the book, including one collection of photographs from the Woodard family of Wilson County, a family that truly suffered more than most during this period. And much to my surprise there is a photograph of the brother of my great great grandfather.  I had never seen this photo of Ephraim Kale, who is a too young, fifteen years old when it was taken.  I have included the captions for both images in the post. 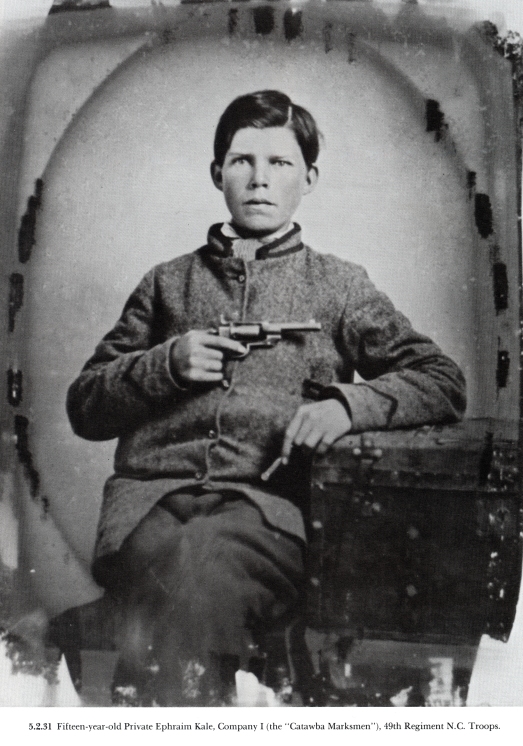 These portraits are now known to be Major Thomas Martin of the 13th North Carolina, Co. E. (the the one on the left has been colorized) and are found in the Liljenquist Family Collection at the Library of Congress

The Library of Congress Prints & Photographs divisions has announced that their two ambrotypes of  Wilson County native,  Civil War soldier and namesake of a local SCV chapter, Captain Jesse Sharpe Barnes, was mislabeled and the portraits are actually of his cousin (or maybe his wife’s cousin), Major Thomas Alston Martin.

This was all made possible by the tireless work of Katharina Schlichtherle, historian, teacher and friend of the Wilson County Local History and Genealogy Library.  Katharina is a resident of Germany but last summer she visited Wilson County for her ongoing investigation of the local Barnes family in the 19th century and performed some research at our library.

During her research online, she came upon an image in the book, Histories of the Several Regiments and Battalions from North Carolina, in the Great War 1861-’65 (digitized and online at the Internet Archive) that was labeled Jesse S. Barnes, Capt., Co F.  This portrait was not the same person labeled as JS Barnes in the LOC collection.  This image was in the LOC Collection but it was labeled only as “South Carolina Militiaman” because of his SC uniform.  It turned out that Jesse had joined up in South Carolina before North Carolina had seceded as many North Carolinians did at the time (North Carolina was the last state to secede).

As to how they figured out that the other portraits was of Major Thomas A. Martin, Katharina told me that during a curator’s examination of the portraits, a piece of paper serendipitously fell out of one of them that read “Friend Tom Martin”.

I stay in touch with Katharina and try to help keep her Wilson County and Civil War obsession fed.  And it has worked! She is coming back next summer.

The news about the name correction was in an article that Katharina sent me in this month’s Military Images Magazine. 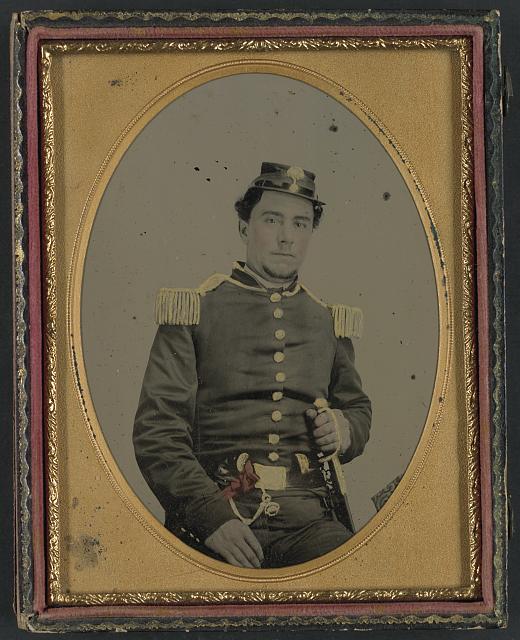 The actual Captain Jesse Sharpe Barnes of the 4th North Carolina Infantry in his South Carolina Militia uniform also of the Liljenquist Family Collection at the LOC.  His career was cut short, dying at the battle of Seven Pines on June 1, 1862. 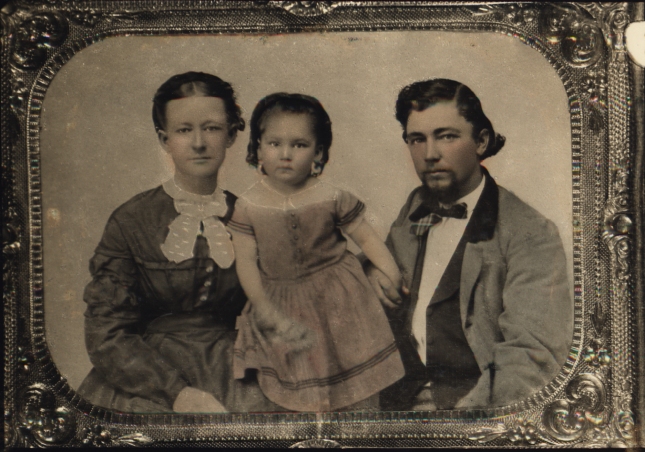 Sally Hooks Harper and Luby A. Harper (long-time Sheriff of Green County) with their daughter Stella Maria. Stella would eventually marry Elbert A. Darden and live in Wilson. Sally would  die before she was forty after having nine children and her arm amputated. Luby would remarry Alice Shepherd Carr and they would have two children together. 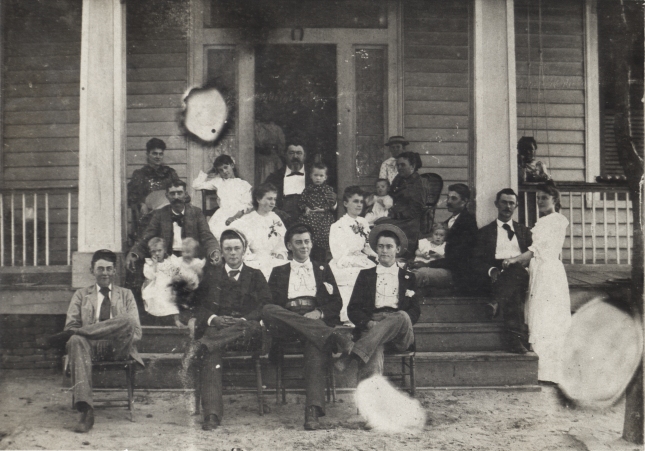 Luby is in the back holding his son David from his second wife Alice Carr who is to his right holding their youngest son Zan. In front of Luby is his two daughters Sally Canary and Hattie Letitia. Stella is to his left with her husband Bert Darden. The four boys in the fron from left to right are Stuart Carr, Albert Titus Harper (lived in Wilson and never married), Robert Carr and Charles Harper (later lived at 606 W. Nash Street). ca. 1890’s, Snow Hill, NC

Monday I received a package in the mail containing  a treasure trove of artifacts of the Harper family.  The package was sent to me from one of their descendants who thought that the Wilson County Public Library would be a fitting place for the collection to reside, even though she lives hundreds of miles away in upstate New York.

The Harpers were originally from Greene County, but many of them moved to Wilson near the turn of the twentieth century. 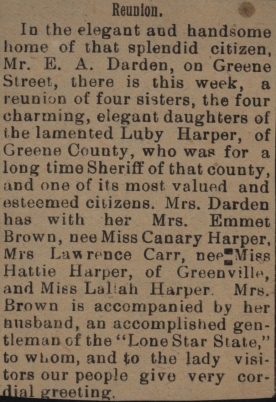 Unfortunately I don’t have the date of this article from the Wilson Times about the Harper family reunion.  Bert Darden was a VP for BB&T. 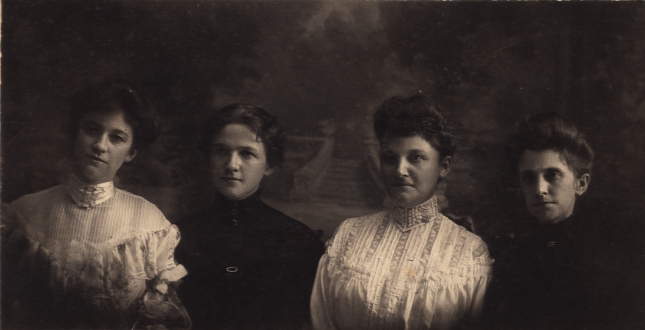 They were very concerned about Rubin swinging with the Girls.

Last week I scanned over 100 archival documents that were brought in by one of my dear patrons, Lois Bass.  Her father, Arthur Bass, actually led the ceremony to open the WIlson County Public Library in 1939. There are letters, deeds, wills, indentures, receipts and plats that she found tightly folded in a small tin box on a shelf in her father’s storage shed that range in date from the 1700’s to the early 1900’s.  She doesn’t seem too keen on giving any of it to the state archives so I wanted to scan the documents for use in the library at least.

Here is a transcription of the second Civil War letter in the collection.  This one is from Private Bunyan Barnes and Private Ervin Bass.  They were very concerned about all the girls back home being married off to someone named Rubin before they got back from the war.

P.S. I will put in a few words of news I saw your sweet heart this evening and he was feeling very poorly with a bad cold I would like to be back there to see some more fun with you and the girls but I cant fo(re)tell when I will be able to get back to see You any more but you must tell the Girls they must not get married until we all come back for I don’t think you have got any young men there to be with except Rubin I guess he is thare yet I guess he has got his own swing round the Girls I don’t think I have anymore of interest to write this Time You must excuse bad writing and mistakes for I had to do this in the knight and I was getting sleepy I will close by sayin I remain yours Truly 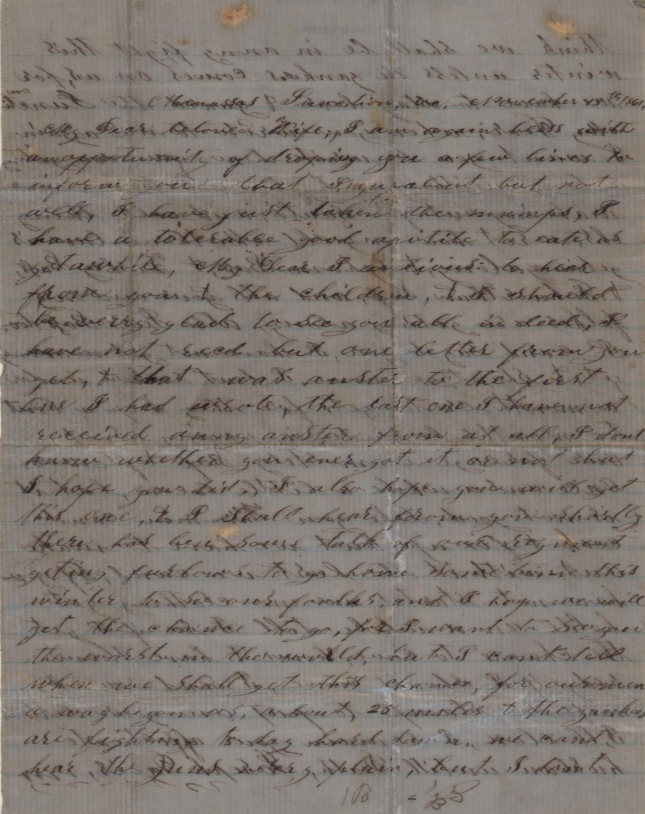 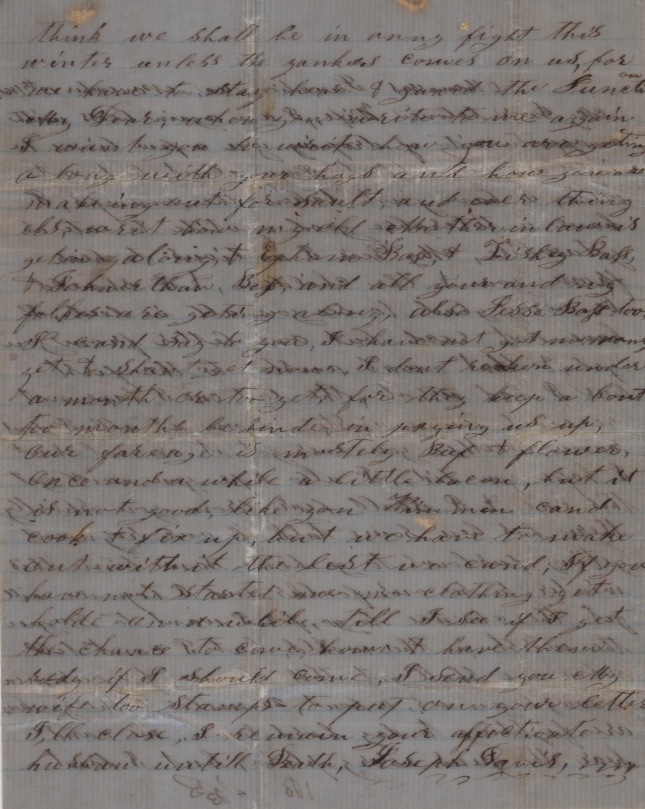 One of my patrons brought a the letter of her grandfather, Joseph Davis,  a private in the 4th NC regiment and a resident of Black Creek in Wilson County for me to digitize recently.  The letter is dated November 13, 1861 and he is stationed at Manassas Junction, VA guarding the depot that the Confederates had won after the first battle of Manassas in July.  The letter speaks of the universal longings of any soldier, food and family.

Pvt. Davis was later wounded captured at the battle of Antietam and was soon paroled and worked as a nurse at the Wilson Confederate Hospital.