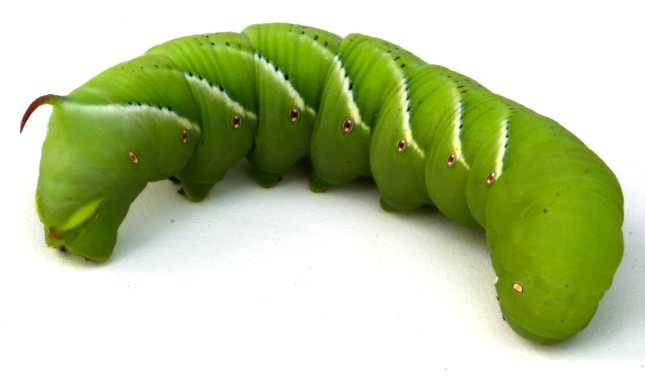 Eat me and you die, or get a buzz

This is tobacco country so it is safe to say that anyone who grew up in Eastern North Carolina is familiar with the ubiquitous tobacco hornworm.  Recently scientists have discovered that this caterpillar that feasts on tobacco plants has a very unique defense to deter spiders from having them for dinner.  This defense involves the nicotine that the hornworms take in while eating the plants.

Each day the caterpillar ingests six times the lethal dosage of nicotine for humans.

Most of the nicotine they excrete in their waste, but they keep some of it which they breath out of their spiracles (breathing holes) and this halitosis warns spiders that they are toxic.  So unless the spider is a 2 pack a day smoker, they will leave the little guy alone.

We have so many new books from the Grace Turner Collections that I am not even listing them all because my fingers are too tired.  She must have had quite the elusive ancestor ancestor in Lincoln County, NC because we have about every book ever written on the place.  This is nice for me because I am from Gaston County and it was a part of Lincoln County until 1847.

My colleague and I finished tabulating the data from the circulation record of the Wilson School Library from 1899-1901.  It took a lot longer than I would have thought but there were a lot of books that were checked out, 1924 books in total for 139 children.  But it was fun figuring out what the books actually were from the librarians’ short hand and the fact that numerous books had been out of print for many decades.  Here is a list of the top ten checked-out books for boys and girls.

From the data you can see that there were five more girls than boys, but boys checked out 184 more books.  My colleague and I did not find that surprising due to the lesser importance education was placed on girls than it was for boys during this period.  We both thought that if we looked at a modern circulation record that the girls would out-pace the boys, but that is only our non-scientific opinion.

Also from the data you can infer that the boys and girls kept to very gender specific books.  The boys read books with masculine themes and the girls read books with feminine themes.  Of course if you look at individual records you will find that some boys liked to read the occasional book from the Elsie series and some girls went for the masculine adventures like Kidnapped.  But the big picture presented a large dichotomy between the books read by the boys and the books read by the girls.  We can only give an educated guess at what modern boys and girls  reading habits are without looking at their records but I think that there are more books today with a cross gender appeal (the Harry Potter series and Lemony Snickett series for example)  and gender roles aren’t as emphasized  as they were during Victorian times (also called the Gilded Age) so I think that you would have several books on both top ten lists.

I found it interesting that books about the American Civil War were not very popular among boys.  The only book in the top ten that covers the period is With Lee in Virginia.  Books about Cuba, Cuba in Wartime and Cuba’s Struggle for Freedom, were more popular. This is most likely because the Spanish American War  ended the year before the circulation record starts.  Perhaps the collective memory of the Civil War had waned a bit by this time, at least in the mind of boys who were now starting a half century long infatuation with everything Western.  The number one book for boys was the Western themed Across Texas.   The love for Cowboys and Indians among boys was fueled by wild west shows such as Buffalo Bill’s which were traveling all over the US and Europe at the end of the 19th century and the beginning of the 20th.  Buffalo Bill’s show had come to Goldsboro and Raleigh in 1895, and may have counted a few of these students among their attendees.  The show would come to Wilson in 1909 and 1916.

The Elsie series dominates the girls circulation record with four books in the top ten.  These novels revolve around a girl that lives on a plantation in Virginia in the Antebellum South.  It turns out that just as the GA Henty novels (as I mentioned in and earlier post) are popular with Christian home-schoolers today, the Elsie novels, by Martha Finley, are also popular with the same group and have been promoted by the Christian group Value Forum.
There is an interesting  critique of Finley’s novels here, which does have some unsettling passages from the books about slavery.  But I think that the novels are reflective of the period in which they were written.  A period in the South after the Civil War that whitewashed the era before slavery was abolished.  This had to do with a lot of factors including that failure of Reconstruction and the poor economy.   Although the boys had moved on to other genres the popularity of the Elsie novels gives evidence that the Antebellum period still loomed large in people’s mind.

At first I was surprised to find that the most popular books at Wilson School in 1899 were books from authors that I had never heard of, while the classics were not very popular.  There is only one book in the top ten that would be considered a classic, Jane Austin’s Emma, even though the library carried books by Dickens, Stephenson, Alcott, Frances Hodgson Burnett, Sir Walter Scott and James Fenimore Cooper.  But after giving it a second thought I realized that the adult books that are the most popular in our library are not from your Jonathan Franzens or Margaret Atwoods but are from your Nicholas Sparks and James Pattersons.  And I think it would be a safe bet to say that Patterson and Sparks will be long forgotten (except in the Internet Archive where I found most of the books from 1899) one hundred years from now and not on the virtual shelves of libraries of the future.

Finally, one other piece of information that the record divulges is that two of the students, Luther Ruffin and Susie Williams, died during the summer of 1899.  I found the Wilson Advance newspaper article that details Susie’s long battle  and death from typhoid, but I could find no mention in the paper of Luther’s death.  Susie’s death of a disease and Luther’s death of unknown causes highlights the fragility of children during this period when the germ theory of disease had only recently been discovered and antibiotics would not be on the market until 1932.

This week we have processed and put on the shelf some of Stewart Dunaway’s unique work on the Mills, Roads and Bridges of NC as well as some SC and Scottish resources.

The Henry-Murphy House in Burgaw, NC  is the new home of the Dallas Herring Carolina Heritage Collection

Also, Bertie, Brunswick, Bute, Camden, and Catawba Counties were added to the Loose Estate Records index over at Family Search.

I have found the Estate Records at Family Search to be one of my most invaluable resources in helping patrons overcome brick walls.   But unfortunately the Loose Estate Records for Wilson County have yet to be indexed.  So anyone with time on their hands and interested in volunteering go to this link!