I was contacted by a researcher collecting the images of Vietnam War Veterans who were killed in the war.  These images were to be matched up with the Virtual Vietnam Wall of Faces and the deceased veteran’s grave on Find a Grave.com.  The researcher was looking for a picture of a Wilson County Marine who was killed in Vietnam in 1968.  His name was Marvin Bullock and he was a graduate of Speight High School in 1968.  Try as I might, I could not find a yearbook for Speight but I did find a graduation picture in the Wilson Times from that year.  The picture is not that great quality so the researcher is pursuing some family members that I found the names and telephone numbers for.  Hopefully an image of Marvin will soon grace the wall with his comrades who gave their lives in a distant war. 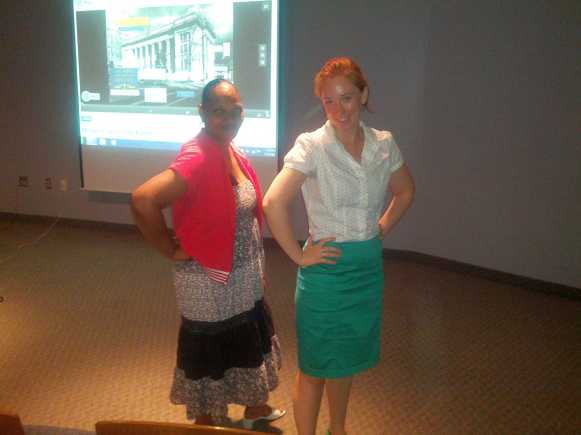 The Civil Rights and Restorative Justice program that we had last Thursday night at the library was quite excellent.  Rosie and Molly, the JD candidates, had a well researched and thoughtful presentation on the three African American WWII veterans that were victims of racial violence in Wilson and Johnston counties in the 1930’s and 1940’s.  Although there was low attendance, there was still a spirited discourse on how to reconcile and keep the memories of people  and their families alive who did not  any receive any justice  for the crimes that were committed against them 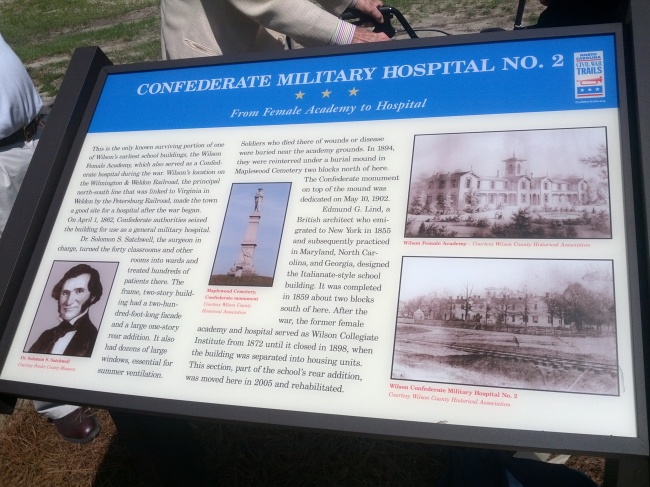 The top right picture on the marker was what the Hospital looked like during the Civil War era. 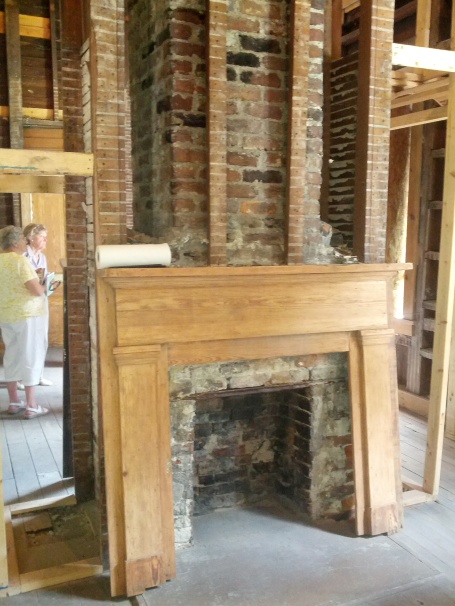 Interior of the museum. 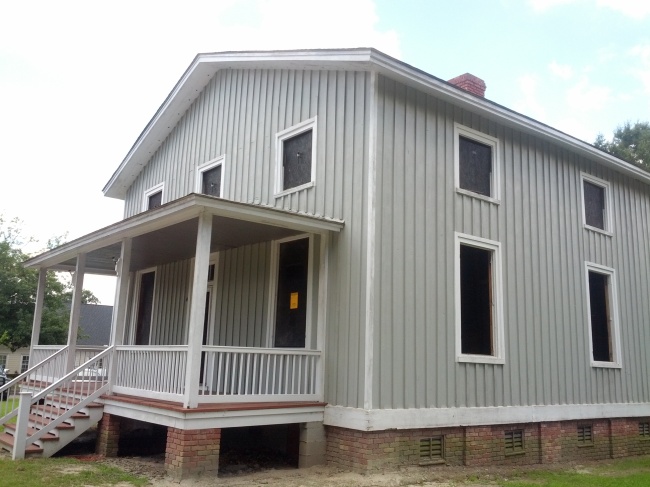 The last remnant of the old hospital.

Yesterday I was able to attend the unveiling of Wilson’s new Civil War Trails Marker for the Wilson Confederate Military Hospital No.2 Museum (see earlier post).  There I met the mayor of Wilson, the NC tourism director and John Hackney, the WWII P-51 pilot I posted a picture of recently. The marker looks great but the museum still needs a lot of work.  However, it was very interesting to walk inside of the building and see the restoration in progress. 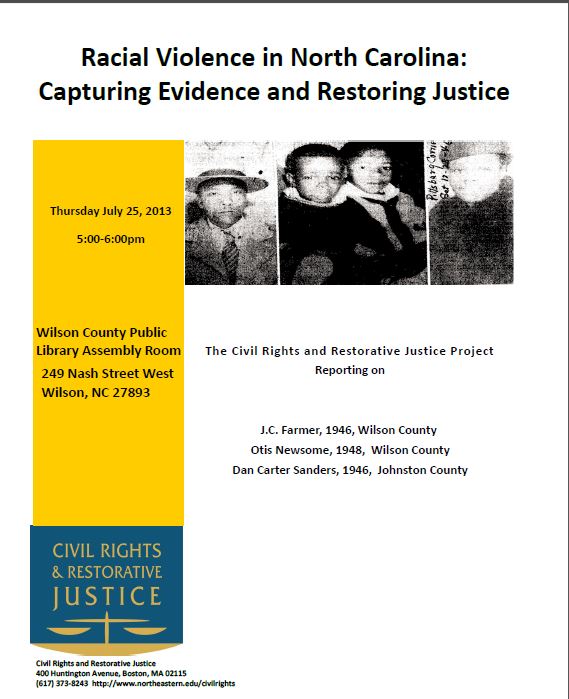 Tomorrow at five in the assembly room I am hosting two JD candidates from Northeastern Law School in Boston, MA.  They are giving a presentation of their findings on the 1940’s era murders of 3 African American men in Wilson, NC.  Their work is a part of Northeastern Law School’s ongoing Civil Rights and Restorative Justice Project, a program that tries to shed light on Jim Crow era murders of African Americans in the South who were killed due to racial violence but no one was convicted of the crime.   They contacted me a couple of weeks ago to see if I could help them find family members of people in involved in the murder trial of Otis Newsome, a WWII vet and funeral director who was killed in cold blood in 1948 while trying to buy a bottle of brake fluid.  I was able to find and interview the son of the prosecutor who was able to give the law candidates access to his father’s files on the case.  It should be a very interesting presentation and I am honored to be a part of it. 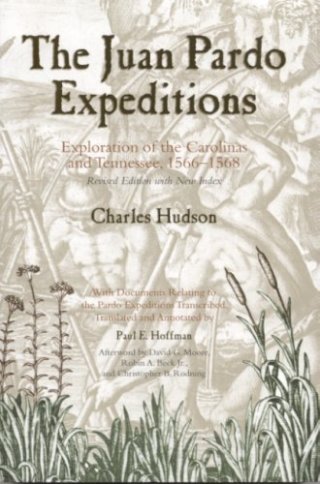 From its founding 1566 to its destruction by Native Americans 18 months later, Fort San Juan was the  innermost European penetration into the American interior in the 16th century.  Its hard to believe that there was a Spanish Fort right at the foot of the North Carolina Appalachians in the mid 1500’s but it is true.  Last June while excavating the proto-historic Cherokee town of Joara, archaeologists from Tulane, Warren Wilson College and the University of South Carolina discovered a European style moat, Spanish huts and military artifacts.  Fort San Juan was built by the Juan Pardo expedition, an expedition that  was instructed to follow in Hernando DeSoto’s earlier (and incredibly destructive) path in order to create a link to the Mexican silver mines.  Unfortunately for them they were way off geographically and managed to anger the local Native Americans who well remembered DeSoto’s disastrous visit with his armored knights and 300 pigs 20 years before.  The archaeologist from USC, Chester DePratter, is one of the foremost experts on the Spanish in the Southeast and he also worked on the coastal fort of Santa Elena on present day Parris Island, South Carolina (where the Pardo expedition set off from) with legendary archaeologist Stanley South. 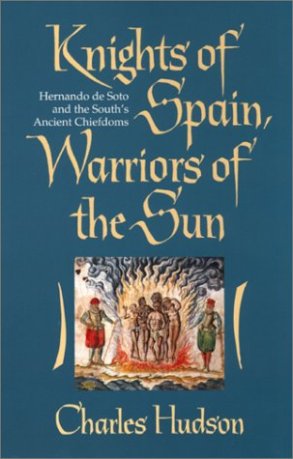 favorite books of all time, Knights of Spain, Warriors of the Sun and another great book, The Juan Pardo Expeditions both by the late preeminent Southeastern anthropologist, Charles Hudson. 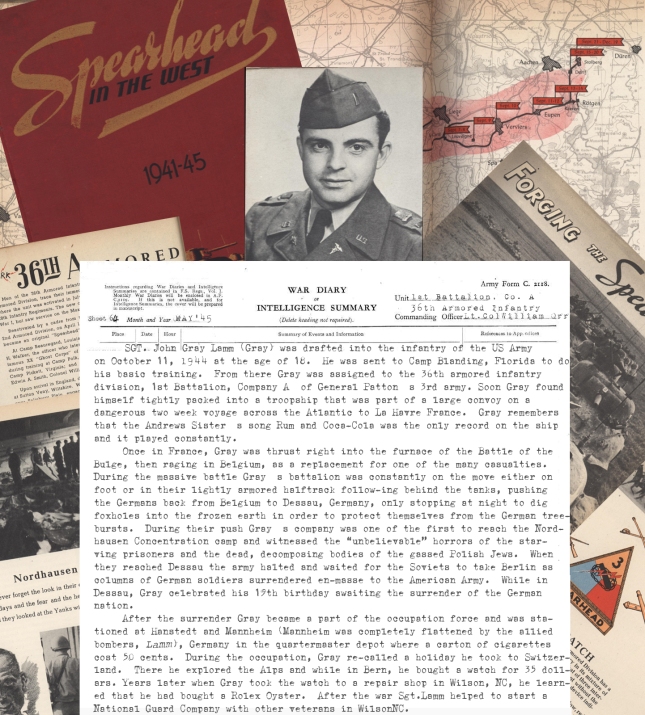 Just created a splash page for an interview that I did with WWII veteran Sgt. John Gray Lamm.  This will be a part of the Digital NC Wilson County’s Greatest Generation project. 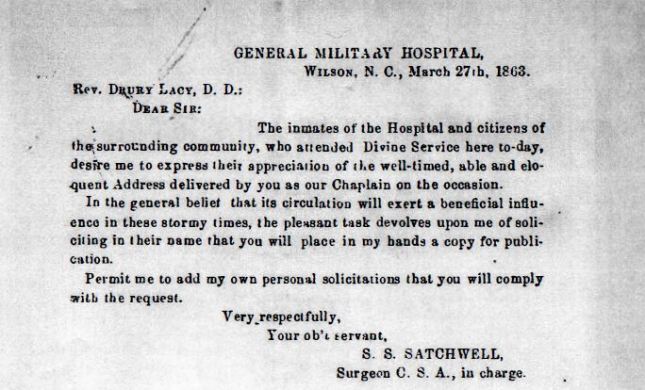 On Tuesday July 23 at 11 am, there will be an unveiling of the Civil War Trails marker for the Wilson Confederate Military Hospital Museum.  It is located on 401 Goldsboro St. N. Wilson, NC 27893.

Here is a description of the hospital from the North Carolina Department of Cultural Resources: 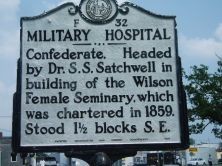 The Confederacy organized its Medical Department late in 1861 and within months, in April of 1862, the North Carolina General Military Hospital No. 2 was established in Wilson in what had once been the Wilson Female Seminary. Dr. Solomon Sampson Satchwell, who had graduated from Wake Forest College and studied medicine at New York University before serving as a military surgeon with the Twenty-fifth North Carolina Infantry, was appointed Surgeon-in-Charge. In the 1864 Confederate States Medical and Surgical Journal the Wilson hospital was listed as one of twenty-one principal hospitals in North Carolina. It served those wounded in fighting along the coast. 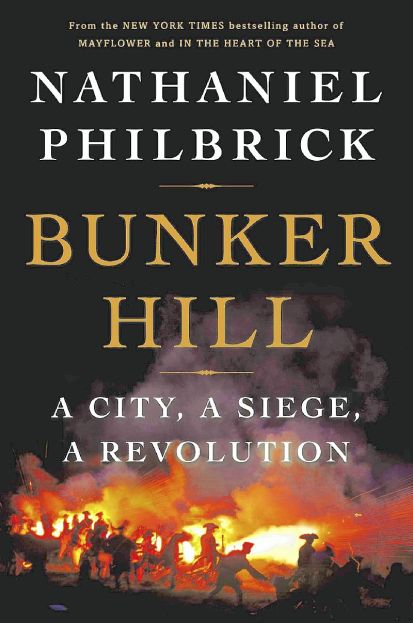 Soon to be movie starring Ben Affleck (not a joke)

Recently I read two books: one was great and one was pretty good.  In this post I am going to discuss the pretty good one, Bunker Hill: A City, a Siege, a Revolution by Nathaniel Philbrick, first.  The great one, The Black Count: Glory, Betrayal, and the real Count of Monte Cristo by Tom Reiss, I will discuss at some later date.

I had read two of Nathan Philbrick’s books, In the Heart of the Sea: the Tragedy of the Whaleship Essex (the true story of Moby Dick) and Mayflower: A Story of Courage, Community and War (Pilgrims, pilgrims, pilgrims) before I read his new book Bunker Hill.   So I was familiar with his writing and I think that he is a very competent author of pop nonfiction.   In Bunker Hill he recounts the period in Massachusetts surrounding the Battle of Bunker Hill, perhaps the bloodiest battle of the American Revolution.  He does something slightly unique with the book by focusing on a lesser known founding father, a man named Dr. Joseph Warren.  Warren was an interesting figure in that he was a medical doctor and also the president of the Massachusetts Provincial Congress and the Major General of the colony’s militia who assumed the rank of private so he could fight in the front lines of the battle on Breed’s Hill, where he lost his life.  The author also humanizes the British troops portraying them as not some monolithic boogeyman but as people with real reservations about fighting their fellow Englishmen and were suffering many deprivations being stuffed into Boston with few supplies.

Some passages that  stand out to me are little things such as the irony of the British troops playing the medieval ballad Chevy Chase as they march unknown into conflict at Lexington and Concord.  Chevy Chase (or the Battle of Otterburn) is an account of a battle where the English army led by Henry Percy (Hot Spur), Earl of Northumberland, chases the Scottish army into Scotland only to be defeated in a rare medieval night battle. Furthermore, Philbrick paints a very nuanced depiction of George Washington. Although he is a bit of an haughty Virginia slave owner and doesn’t hide his contempt for the more egalitarian population of New England, which they often resent him for, Washington comes to respect their fervor, fighting skills and ingenuity. Likewise, he is initially against using free black men as soldiers until he is confronted with the fact that the most lauded soldier for bravery during the battle of Bunker Hill, a battle where many white men ran away from conflict, was a free black man named Salem Poor.  The author portrays astutely Washington’s  ability to rethink internalized beliefs by allowing free blacks to serve in his new Continental Army now that he has seen how they can fight.

The depiction of the battle of Bunker Hill (actually Breed’s Hill) is the best writing of the book.  You can really get a feel for how desperate and murderous the battle was. And although the British won the field, their casualties were many times that of the Americans, casualties that were vividly depicted by the author, thrusting you into the grim reality of battle.

The main thesis of the book in my view is that the elites like Joseph Warren and George Washington won the revolution,  but I have always leaned on the  history from below approach, which compels me toward the belief that it was the common man such as freed-man Salem Poor at Bunker Hill or the 58 year old family man, Jason Russell, who was killed on his doorstep defending his home along with twelve other militiamen during the battle of Lexington and Concord, that really won the revolution through their bravery and sacrifice. 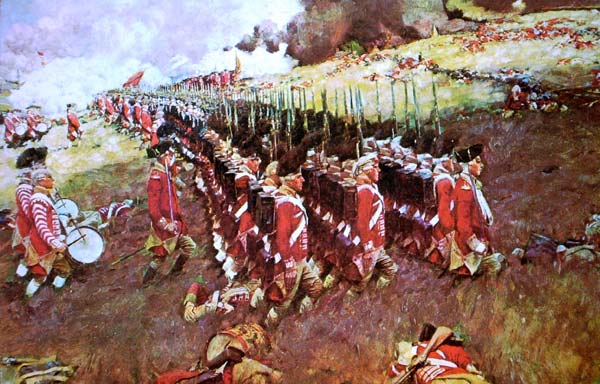 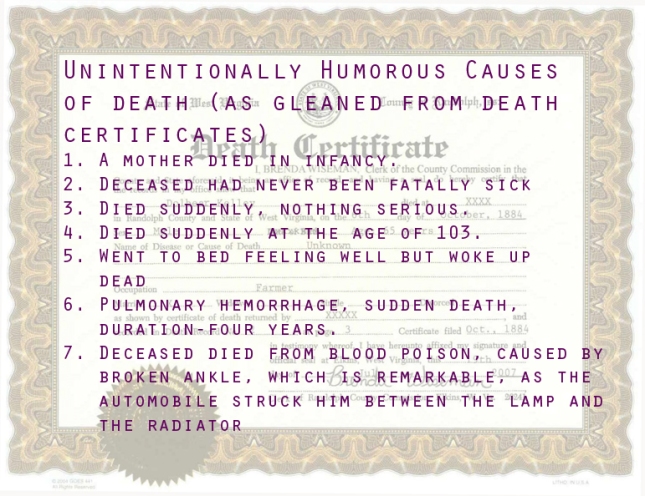 I’m not sure about this design I made. Yeah, I don’t like it.

A volunteer gave me this list that they found about unintentionally funny causes of death written by sleep-deprived attending physicians. 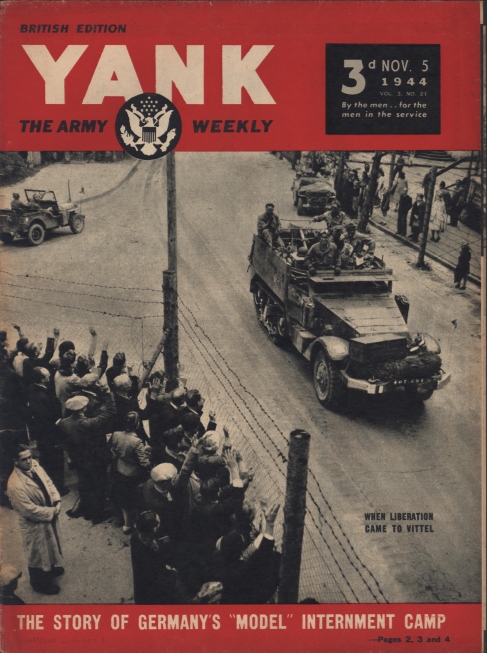 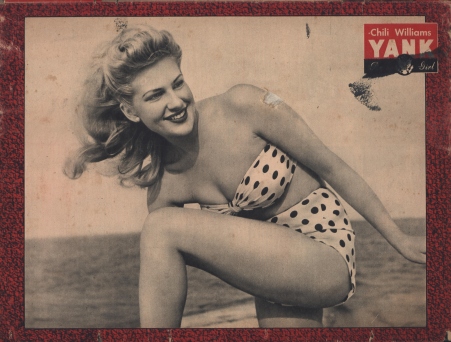 I’ve got a stack of Yank Magazines from World War Two in the Local history room.  I just digitized one of them from November 1944.  Yank Magazine started in June, 1942 and ended in December, 1945.  It had 21 edition on in 17 countries (the editions we have are British). They were made for GI’s and the magazine looks like it was modeled on Life Magazine with it’s large photo’s and even the cover design.  Inside the one that I digitized you will find an article on the liberated concentration camp called Vittel, an account of the battle for the German city of Aachen (I visited the rebuilt version of Aachen 10 years ago), the Japanese threat to China, news from home, sports, letters and the most popular feature of the magazine the pin-up girl.